The Home Show has every shape of fireplace you can imagine; we run through five fireplaces that lit up the show.

We all have different desires for a fireplace. For lovers, it’s lying on the Persian rug, sipping wine with your significant other and watching the flames dance. For families, it’s gathering in the garden on a crisp winter’s evening serving up a chicken roast.

No matter which way you spin it, fireplaces play a central role in not just keeping us warm, but providing a central place to converge and socialise. Finding a heater is a choice based on practicality, quality and aesthetics. How you balance those three will reflect yourself and how your home is enjoyed. 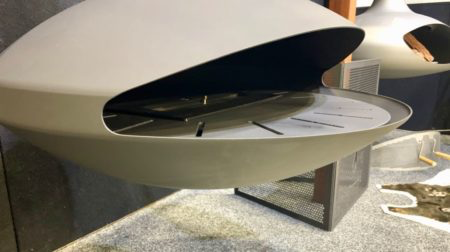 Here’s a Home Show stand that never stopped piquing curiosity. Two imposing structures suspended in mid-air. Each with their mouths open, waiting to be fed wood. With sleek one-piece folded steel; it’s a striking feature for the home.

Compact, precise and self-contained. These suspended fireplaces can be installed where most others can’t. And with a 360-degree swivel, can be turned to face the action. It acts primarily as a heater and secondarily as a pizza oven. So you can swivel towards the kitchen as you prep, and rotate back to the living room while you feast.

It takes two energy sources: wood and bioethanol. Wood can produce up to 7.2KwH of energy which can heat a 150m2 room. Bio-Ethanal produces 4.5KwH of energy, enough to heat a 50m2 room, though it’s significantly more expensive than wood. You can calculate which source you need for seasonal demands.

Does Aurora ring a bell? That’s because it debuted on The Block and House Rules. The owner, Chloe Allen, told us a producer called out of the blue and her response was unknowingly broadcast on TV!

These suspended fireplaces are hand made in Byron Bay, easy to install and come in 25 colours to suit even the wildest of interior decorations. A true centrepiece for the modern home.

Like a kid in a candy shop; Kevin Alexander gave us a tour of Escea’s range of gas fireplaces at the show. The designs act as windows, inviting you to peer through. Like comparing an old TV to a new rimless flat screen model, these fireplaces are so slim and unimposing, they blend into the home and future seamlessly.

Every home is catered for. Electric heaters that don’t impede on safety regulations for high-rise apartments. ‘Clean lines’ mean gas can be pumped through multiple rooms in the home. And outdoor tables with a Korean BBQ nestled in the middle create the ultimate shared feeding experience.

Yet, it’s the tech that really shines here. Every set-up boasts high-star efficiency ratings and a power flue system. They can be installed in any orientation without messing with passive energy designs. Smart home integration means you can have your home toasty when you wake up, and easily make changes from a sun-bed in Bali.

Unlike wood, these gas and electric heaters instantly supply a steady temperature all-year-round. Additionally, they can accommodate TVs and other existing furniture as the heat is lower and more ambient. Most of the collection are dual purpose cooking/heating, ready to cater for friends or family visits.

The heaters can be installed anywhere without the need for a fake wall. Soon Escea will be introducing a 1900mm single pane glass electric heater to the series, which we might be lucky enough to see at the next show…

Modular, modular, modular. If you (secretly) like Lego or Minecraft, then you’ll love this outdoor BBQ entertainer. Inspired by the South African brie or Italian BBQ grill, this massive outdoor centrepiece is of Roman proportions. Where guests or family members can bask in the warmth of the embers all-year-round.

Let’s not mess around here, this is a foodie’s fireplace. The five-way cooker will launch your career in the art of meat management including charcoal management, tender loving slow cooking, carriage smoking and rotisserie spit roasting. Even pizzas can be cooked in minutes and apple crumbles can be stowed away until the end of the night. As owner Tory Hilton tells us: “Your guests don’t even know it’s in there until the end of the night when you bring it down, and they go ‘oh my gosh!’”

Like a snowflake, one fireplace is never the same as the next. Thousands of combinations include multiple fireboxes, chimneys, hearths, riser blocks and textures including black oxides, plastered, stone, marble, granite. Additional doors can be installed at the front for safety and fire restrictions.

Tory reflected on the changing times: “In our culture, we’ve been so quick to jump on the gas BBQ over the last 30 years and it’s kind of like a ‘gobble and go.’ As the culture grows, people are saying ‘let’s slow life down a bit.’ And that’s what cooking with fire does, it slows life down as you sit around the fire.” 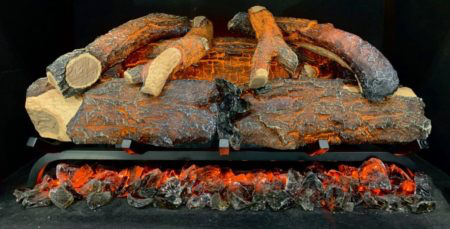 Like 3D flat screen TVs, these electric fireplaces should be called ‘eclectic fireplaces’. Multicolour LEDs spin to give off that Christmas tree look. As there is no heat inside the glass enclosure, you can get creative. Decorate for the summer with seashells and blue lights or add red lights for a Lord Of The Rings Lego scene.

Let’s be clear; this is an extremely energy efficient heater (37 cents per hour) for up to 45m2 spaces like apartments or individual rooms. This is a secondary heat source to be used in conjunction with central heating or a heat pump. One model is so thin, it can be wall mounted.

An advanced electric coil sits inside the appliance producing 2kWh power. Then a fan pushes out warm air to circulate around the space. Control the heat and lights with a remote control or buttons on the side. 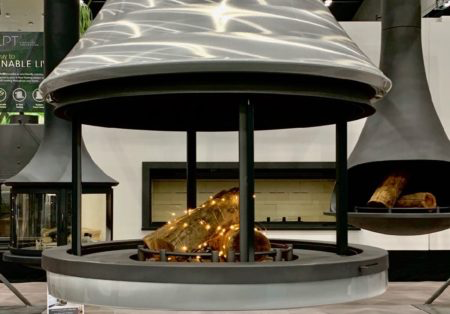 Viva la France! If you dig the character, style and grace of European design, take a look at these French delicacies. Pure cast iron, ash pans and drawbridge doors bring us back to a time when castles were inhabited by kings and Game of Thrones was a reality show instead of a drama series.

Seguin series – manufactured in the heart of rural central France. Straight out of the iron forge, these 100% pure cast iron creations trap heat in the dense metal. They have safety doors that stop you from accidentally blowing smoke and ash all over your living room. One design looks like a guillotine, which connects a chain to a rotating handle for an open fire or closed slow combustion.

Axis series – manufactured in the Rhône-Alpes overlooking snowy Mont Blanc. This series sports the largest wood fireplace in Australia. Originally built for ski chalets and 2000 metres Après ski, these giants will heat a mansion and then some. Despite their historical uses, they still look modern with minimalistic design. Bring lots of firewood!

JC Borderlet series – manufactured in Montpellier near the ocean. This range of ultra-modern fireplaces is a sure-fire way to set the stage. The Brut Zelia, in the fashion of Spice Girls, made its first Australian appearance at the Home Show.

The premium range is supplied to hand-selected retailers across the country to ensure a quality installation. 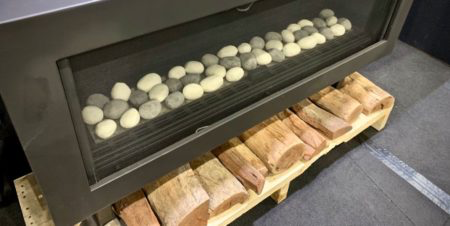 Last but not least we have Australia’s largest range of fireplaces (55). The indoor gas range reflects fish tank and rabbit hutch designs, to be enjoyed from every possible angle with its fine-meshed glass.

With a gentle ambient temperature of 58 degrees, you can leave the windows alone. The double-layered glass means kids can touch the case without burning their fingers.

The low-level heat also means you can keep a TV above the unit. For the same reason, any material is safe for the fake wall. Personalise the glass cabinet with a choice of four logs and six stones.

5 advantages of a downdraft extraction system