Getting Steamy with MasterChef’s Josh Catalano

Josh was born into a third-generation fishmonger family. The family business, Catalano Seafood, has served the Perth population fresh fish for almost 50 years. Started in 1969 by his grandfather, Francesco Catalano, who migrated to Australia and worked as a potato farmer. Francesco later bought the fish and chip store he was supplying, marking the beginning of the Catalano seafood empire.

With his rich knowledge of local seafood, Josh made his way onto prime-time TV with his unique take on the culinary arts. Shows including Just Add Water (channel 9), Garden Gurus (channel 9) and Delish (channel 7) are just a taste of his work. Tools of the Trade

Josh says we barely understand our ovens, “Most people use the setting with the circle and fan, then put it on at 180c. That’s how most people are generally using their ovens.”

By not utilising our ovens, we’re selling our food short. Yet, unless you’ve read the 100-page user manual, you’re guaranteed to be scratching your head. Josh explains, “the good thing about a Siemens oven is there’s an information button that tells you everything. Steam, for example, is great for vegetables etc. It will actually tell you how to use your oven.”

A Siemens oven is so jam-packed with tech, it’s lucky the information button exists. Like the activeClean®: Pyrolytic self-cleaning mode heats up the temperature inside, vaporising bacteria and grease.

The option to steam your food even stops the transfer of taste. So, as Josh steamed both rice and a pudding, he was safe knowing both flavours wouldn’t merge. A water tank at the top pulls out for re-filling, giving four hours of steam per full tank. But you don’t have to go full steam. You can instead use a partial steam option to make the roast moist and set the crust of a dessert. 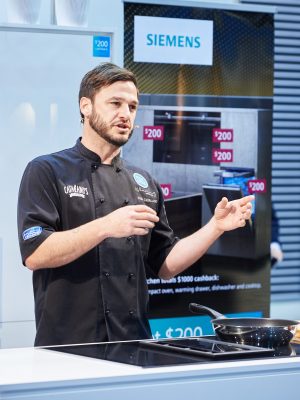 Josh spoke about cook culture, “Most chefs that I know would never put induction into their house. Because [gas is] what they’re comfortable using. If I walked into my dream home 15 years ago, I would put a big 900mm oven in there with six gas burners and then be frustrated every night when I go to clean it. Now, I put in induction because it’s easier to clean and I have a lot more control.”

Josh’s story reflects our general reluctance to change. Some people with gas burners would never use electric. But once you go induction, you never go back. Induction cooking works using a combination of magnets and electricity. The heating element is activated upon a utensil’s contact with the worktop. This method is safer and more efficient than a traditional electric stove.

A Siemens induction system includes a fryer setting that senses when you’ve dropped cold food into the pan. It automatically adjusts the temperature to bring it back to heat.

Josh joked, “who’s got a canopy extractor fan at home that when you put it on setting three, it sounds like a spaceship taking off and you can’t even talk to your wife anymore? Sometimes I turn it on just for fun!” The reason traditional fans are comically loud is because of their distance from the source. The fan is working overtime to suck air and oil over a metre of empty space.

The Siemens cooking worktop contains a silent ventilation duct located next to the food. Fumes are quickly dragged into the exhaust before they reach your nose. Cleaning the filters is easy. Simply pull out the fan and put the components in the dishwasher.

Josh doesn’t enjoy the same luxuries at work, “Most commercial kitchens have a low, medium and high setting. In a busy kitchen, we don’t just sit there adjusting gas. We leave them on one heat, then we just throw the pans around, depending on where we want the heat to come from.” 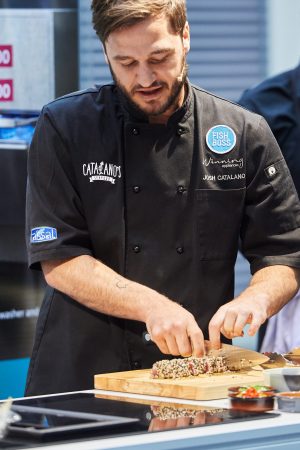 Using his shiny new appliances, Josh got to work on grilling the tuna. Before throwing the fish in the pan, we need to cover it in the following ingredients:

The acid inside the lime and lemon will start cooking the protein. We want to flavour the crust, not the fish itself. Then let the pan cook the tuna. The sesame seeds should stick to the outside of the fish and nearly look like birdseed. When searing the tuna, use grape-seed oil. It can handle the heat and is lighter and healthier than most oils.

Next on the Catalano menu is the pork fillet, which requires some marination attention. Traditionally, you would use a bowl to marinate meat. But that means flipping it over constantly to lock in the marinade.

Luckily Siemens have a modular vacuum pack system that sits below your compact oven. It’s simple; add the marinade and pork to the wrap and close the drawer. The machine will air seal the wrapping, squeezing the marinate around it evenly.

Josh vouches for this cooking method, “There wouldn’t be too many commercial kitchens, here in Perth or all over the world, that wouldn’t have a vacuum seal machine. The way I look at the Siemens range, it’s about bringing the commercial cooking attributes to home cooking.” 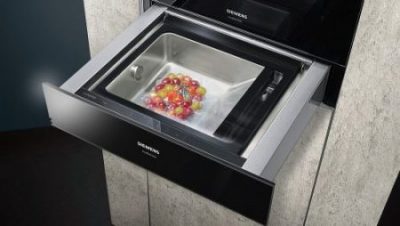 As well as creating delicious marinated meats, vacuum packing is also excellent for food preservation. Vacuum packed and frozen food lasts twice as long as a takeaway container or Glad Wrap. A freezer, while great at preserving food, also drains food of its moisture and nutrients.

Josh explains, “Who’s opened a bag of peas and had ice build-up? Peas you can get away with, but if you’ve spent sixty bucks on red emperor, you want to preserve that quality.”

Once you start vacuum packing, you can’t stop! Don’t end with the freezer; everyday household items can be preserved. Coffee beans, potato chips or any open packaging can be sealed away from staleness.

Now we have our meat marinated, it’s time to cook! Put the pork into a microwave at a low wattage (90 watts) to speed up cooking. Insert a meat probe into the thickest area for even cooking. Then switch the oven to hot air grilling for golden colour and crusting. Once you are happy with the pork, check the temperature on the probe. In future, you want to cook at this temperature. This is a more accurate cooking method than an arbitrary time limit.

Watch the full seminar below:

5 Factors Set To Define The Kitchen Of The Future